With not long until the US election and us leaving the European Union, it’s crunch time for the UK to decide where to focus its negotiating efforts. The UK has been doubling down on trade talks with other countries whilst in the ‘transition period’, which ends on 30th December.

One of the main appeals of leaving the largest trading bloc in the world was the ability to strike direct trade deals with states such as Australia (which was completed in July this year) or the US. However, with Joe Biden taking a lead in the polls there’s speculation about which election result will be the most beneficial to the UK, and whether we will face a change negotiating counterparts before a final deal is reached.

Where are we at now?

I rarely have sympathy for the Prime Minister’s unelected chief advisor/side-kick Dominic Cummings, however this could be the occasion. Trump may be behind in the polls, but no one is approaching this year’s election with the same confidence in the statistics as 2016. He’s not out of the race yet, and therefore not a bridge that can be burned too soon. Trade talks with Trump have therefore continued, however, alarmed advisors believe that even Boris Johnson wishing Trump well after his Covid-19 diagnosis could lead to Biden shunning the UK government. Cummings may have taken some advice from past Love Island contestants by not keeping ‘all his eggs in one basket’, and was spotted ‘wooing’ Biden, with Dominic Raab (the Secretary of State for Foreign, Commonwealth and Development Affairs) conducting backroom talks with the Democrat team, whilst trade talks continue with the current US government.

Continuing to negotiate with Trump would see the Johnson government stuck between a quick and easy deal that may help pull us out of a Brexit induced slump, or conceding on standards that many of us hold in high regard. Hormone-treated beef and chlorine-washing chicken (to make up for poor hygiene standards) are currently banned in the UK. Both are legal in the US – so this is unlikely to be something isolated to a Trump trade deal. However, pro-Brexit lawmakers have put their money behind President Trump as the better candidate for a UK-US trade deal. Robert Oulds, director of the Bruges Group even went so far as to say that “it’s not just a matter of political preference. Jobs and opportunities really do rely in the U.K. on having Donald Trump as president of the United States”, as he believes as a supporter of Brexit, Trump would be more committed to the trade deal than Biden.

Would a trade deal with Biden be better?

Potentially not, as he has always been a critic of Brexit. George Osborne has recently written that his experience with Joe Biden points towards him favouring the EU over the UK (Osborne served as Chancellor under Prime Minister David Cameron at the same time Biden was Barack Obama’s Vice President). From his own encounters, Osborne believes he values the ‘special relationship’ with the UK, but also counts the EU as the key strategic partner for the US. He also seems to view the Good Friday Agreement (securing peace in Northern Ireland since 1998) more importantly than Boris Johnson. Biden recently warned Britain there would be no US trade deal if Brexit put this at risk, the same way that the EU warned to renege on the post-Brexit trade deal after the controversial Internal Market Bill was published. If voted into law, it would break international law and side-step provisions in the EU Withdrawal Agreement that would prevent a hard border between Northern Ireland and the Republic of Ireland. The upsides of a Biden trade deal include his adherence to international agreements and arrangements such as NATO. He is also seen to align better with British priorities including climate change, workers rights and relations with China, for example. Finally, he is likely to be a more predictable negotiating partner, although it wouldn’t take much to become a more rational world leader than Trump.

This has also fallen into the ‘identity politics’ discussion, with Osborne claiming that “politicians don’t forget their tribes” and “Brexiteers aren’t Biden’s”. If he’s right and this really is how Biden views the UK, it could be one of unexpected effects of the way in which the 2016 Brexit vote split the opinions everywhere. 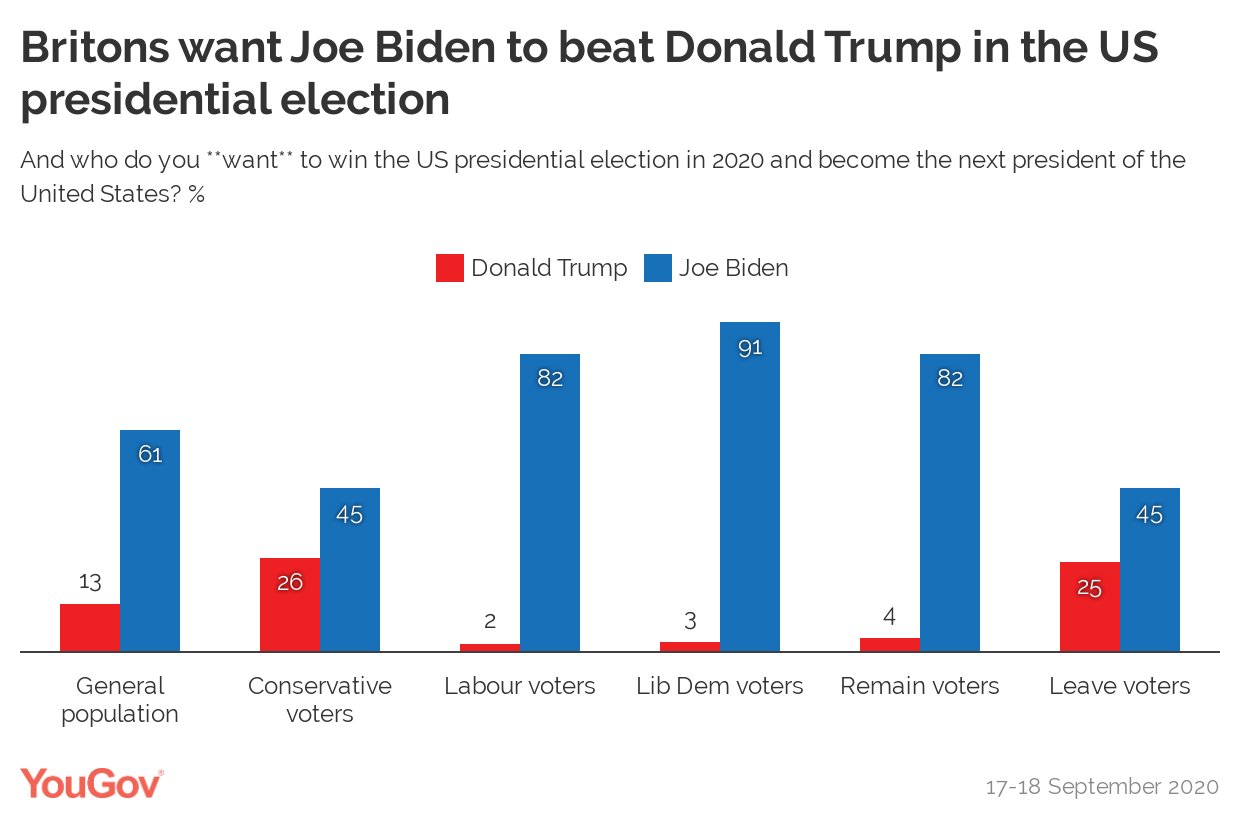 Does this mean we will get a worse trade deal with the US under a Biden Presidency because of his stereotyped views of Brexiteers?

We won’t really know the answer until after the election. However, recent studies show that an overwhelming majority of British voters prefer Biden, including more Brexit voters wanting Biden to win the election than for Trump to stay on as President. The narrative on this relationship is unclear, as something that George Osborne sees as a disadvantage is being spoken about by Conservative Lawmakers such as Daniel Finkelstein see as a reason to hope for a Biden victory: “The things that drive the Trump vote are not the same as drove people to vote for Brexit. There are some parallels between those things. But America and Britain are very different countries”.

Either way, a trade deal with the US was sold to the British public as an easy bid to boost the economy. However, some have speculated that the cost of Brexit will be 30 times as much as we could ever gain back by securing a trade deal with the US. Brexiteers have questioned such forecasts, criticising former Chancellor Philip Hammond of being too gloomy, however the figures don’t tell the brightest of stories. With the Prime Minister announcing an increased likelihood of an ‘Australia style deal’ (aka no trade deal with the EU) last week, securing a deal with the US, regardless of their president, is becoming more and more important.