Skip to content
In the second of a new series of articles called "Youth and the Radical Right", written by interns from the Centre for Analysis of the Radical Right, Maddie Cannon investigates how young women are critical for far right groups

In mainstream conversations about the radicalisation of women, the discourse almost exclusively steers towards the recruitment of young, Western women by jihadist groups such as ISIS. I’m sure, for many in the UK, the standout case when thinking on this topic would be the highly publicised case of Shamima Begum, the now-denaturalised British teenager who left the UK aged 15 to join ISIS.

The radicalisation and recruitment of Begum – labelled the ‘poster girl of ISIS’ – her school friends, and thousands of other young women from across Europe and North America raised questions among journalists and academics regarding the active and willing participation of women in violent extremism.  A sensationalistic and frenzied media circus surrounded the story in a scramble to understand her motivations for joining an ostensibly misogynistic movement, disposed towards the use of extreme subjugation and violence.  So, when 23-year-old ‘neo-Nazi diehard’ Alice Cutter was jailed last year for being a member of National Action, a banned terrorist organisation, and entering a Miss Hitler beauty pageant (see left) under the name Miss Buchenwald – a reference to a WWII death camp – where was the national outcry? 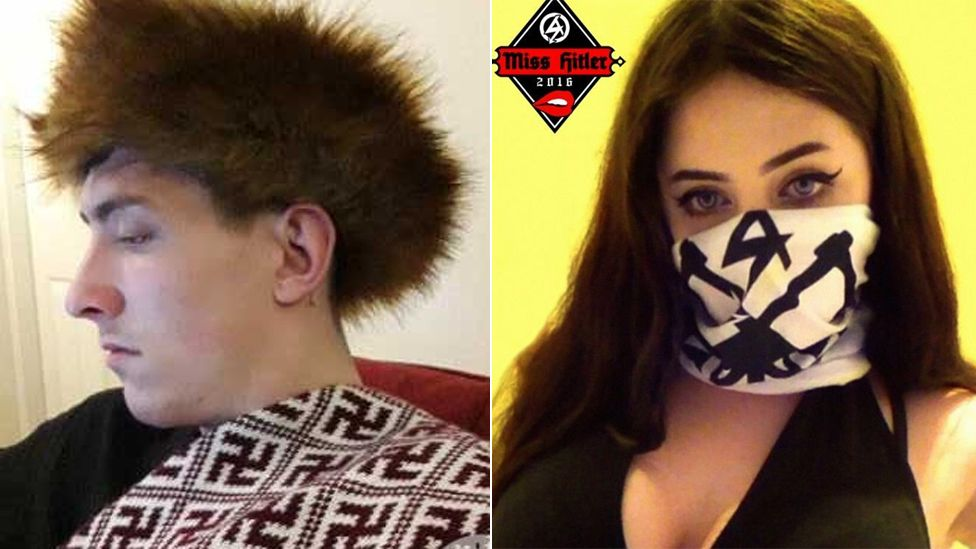 A recent surge in online far-right extremist activity has rendered the movement the UK’s fastest growing threat. The latest research into the radicalisation of people towards extreme-right, white supremacist or neo-Nazi beliefs has disproportionately addressed the experiences of young men on websites, forums and blogs such as Reddit, 4chan and 8chan, colloquially known as the ‘manosphere’. The online subculture developed on these sites centres around a fervent opposition to feminism and progressive values, and instead nurtures the grievances of incels (involuntary celibates), pick-up artists and Men’s Rights activists. Amelia Tait in the New Statesman interviews ‘former misogynists’ who were radicalised online via the manosphere. They discuss the popular subreddit r/TheRedPill, where subscribers don’t shy away from dark truths such as ‘feminism is toxic, sexism is fake, men have it harder than women…they want to be dominated, controlled, and manipulated. The most extreme Red Pillers even believe that women want to be raped’.  In particular, there is an increasing urgency among researchers to understand the nature of the threat of incel violence, which has claimed as many as 50 lives in the US and Canada alone. It’s tempting, therefore, to think of the far-right as a masculine movement full of angry, gun-toting white men, or young, nerdy, insecure virgins. And to a large extent, it is. So in a similar vein to young women joining ISIS, the presence of women in these highly misogynistic and violent far-right and neo-Nazi organisations seems paradoxical. And yet, while women only make up a small percentage of far-right membership, they hold a key role in the shaping and spreading of the movement’s ideology, and have done since the very beginning.

The contributions of white women towards the white supremacist project can be dated back to their role in slavery. During this era in the US, writes Anna North at Vox, ‘white women had little economic or political power, with one big exception: they could buy and sell enslaved people’. This gave white women ‘freedom, autonomy and agency’, and contributed towards their involvement in the Ku Klux Klan (KKK) after the Civil War, which at one point had 1.5 million female members. And although the landscape of white supremacy has changed in the 21st century, women are seen with increasing frequency on the frontlines of protest marches, rallies and riots, and are fast becoming the figureheads and  ‘public faces of extreme-right social media campaigns’ which mainstream and normalise white nationalist, anti-immigration and anti-Muslim sentiments. They also remain integral to the movement as recruiters, organisers, propagandists, mothers and wives. Dismissing both the long history of female perpetrators of white supremacy, and their current involvement in the movement today may have very real consequences. 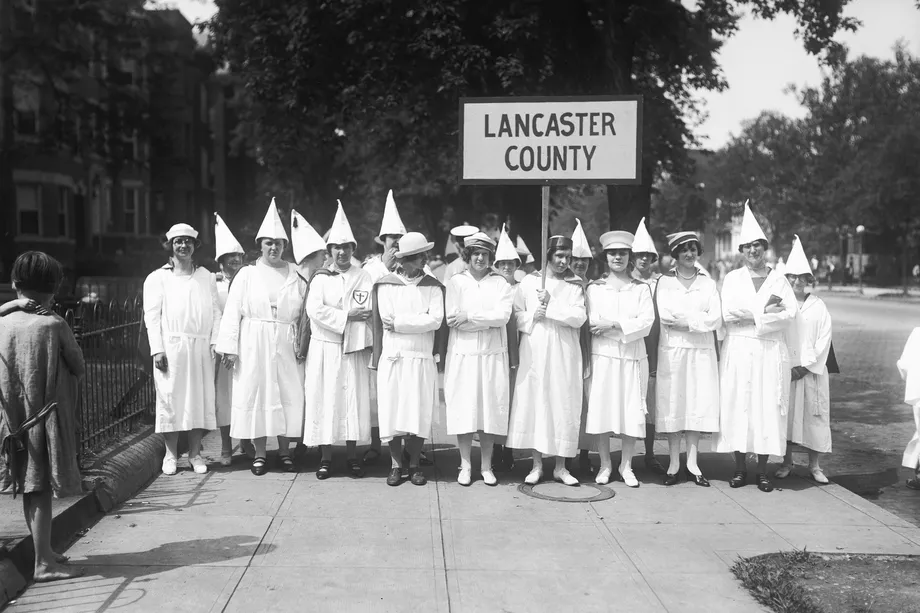 The motivating force of the white supremacist movement can be encapsulated in a slogan known as the 14 Words: ‘We must secure the existence of our people and a future for white children’. Central to this ideology is the need to protect white Aryan womanhood, and to perpetuate the white ancestral bloodline by having as many white children as possible. In 2017, alt-right social media activist and Mormon Ayla Stewart, aka ‘Wife with a Purpose’ issued a White Baby Challenge in which she urged her followers to procreate: ‘I’ve made 6! Match or beat me!’. Stewart is part of a burgeoning anti-feminist movement on social media among ‘soft-spoken young white women who extol the virtues of staying at home, submitting to male leadership and bearing lots of children’, who refer to themselves as Tradwives. According to Annie Kelly in the New York Times, these women deliberately adopt hyperfeminine, 1950s-style aesthetics ‘precisely to mask the authoritarianism of their ideology’. While their involvement may not be explicitly violent or visibly threatening to national security, it is their insidious influence, masked by a softened, feminised façade that warrants urgent attention. The women of the far-right fuel the anti-feminist fire blazing on the alt-right manosphere which directly breeds violence against women, as well as racial, religious and sexual minorities.

These views are no longer on the ‘lunatic fringe’, and are quickly making their way into the mainstream. This renders the study of the far-right an ever-evolving challenge for researchers. Internationally, the movement is constantly developing new ways to recruit, particularly among young people through social media, online forums or video games. In another in this series for Naked Politics, Jack Scates reminds us that young people ‘searching for a sense of identity’, or experiencing sentiments of isolation, social awkwardness and disenfranchisement are most vulnerable to radicalisation into far-right extremism. Spotting these early warning signs among young people, particularly in their teens, is critical to countering the appealing narrative of brother/sisterhood, friendship and belonging that may be offered to them by those seeking to radicalise them. What’s more, the non-violent and seemingly subordinate roles of women in the far-right as wives, mothers, propagandists and recruiters should not detract from their ability to incite or encourage violent action. Neglecting the significance of their roles within the movement has and will continue to have detrimental effects on current counter-terrorism and deradicalisation efforts.