Skip to content
Everyone is feeling the looming anxiety of climate change, but we need to demand and take action

It’s only been a couple of weeks since the IPCC issued a ‘code red’ warning in the form of their ‘Sixth Assessment Report’, presenting the most up to date understanding of climate change – yet you could have blinked and missed it. There were a few newspaper front pages, stern words from Boris Johnson, but not the global reaction the report was deserving of. This doesn’t come as a surprise, seeing as we have essentially entered the apocalypse but most governments are doing nothing about it.

The Intergovernmental Panel on Climate Change is the United Nations body for assessing the science related to climate change, including the implications and future risks of global warming. The 6th report from the IPCC categorically states that “human-induced climate change is already affecting many weather and climate extremes in every region across the globe”, clarifying that this connection has strengthened since the 5th report in 2013.

The extent to which human created emissions and pollutants are impacting weather systems is so extreme that “global surface temperature will continue to increase until at least the mid-century under all emissions scenarios considered. Global warming of 1.5°C and 2°C will be exceeded during the 21st century unless deep reductions in carbon dioxide (CO2) and other greenhouse gas emissions occur in the coming decades.” To summarise, we have two decades to lower our emissions and slow down global warming before the effects are irreversible and uninhabitable.

Although 2°C of warming doesn’t seem like much (a slightly warmer British summer would be welcomed by many) it is enough to cause cataclysmic weather across the globe. We have experienced many of these deadly events this year alone. Fresh fires have hit Greece this week after over 2000 residents were evacuated from the islands after they were ravaged by wildfires at the beginning of the month. Similar sights have been seen in Algeria, Turkey, Canada, Bolivia… the list goes on. 155 people are still missing after 2 months worth of rain hit western Germany in 2 days, and we even saw unprecedented flooding in central London. The most terrifying of all is the recent flooding in China. Subway users in Zhengzhou found themselves trapped on the underground after torrential rain. Many would describe this as ‘the stuff of nightmares’ and it’s horrendous to think that without immediate, emergency action, this is only going to get worse. 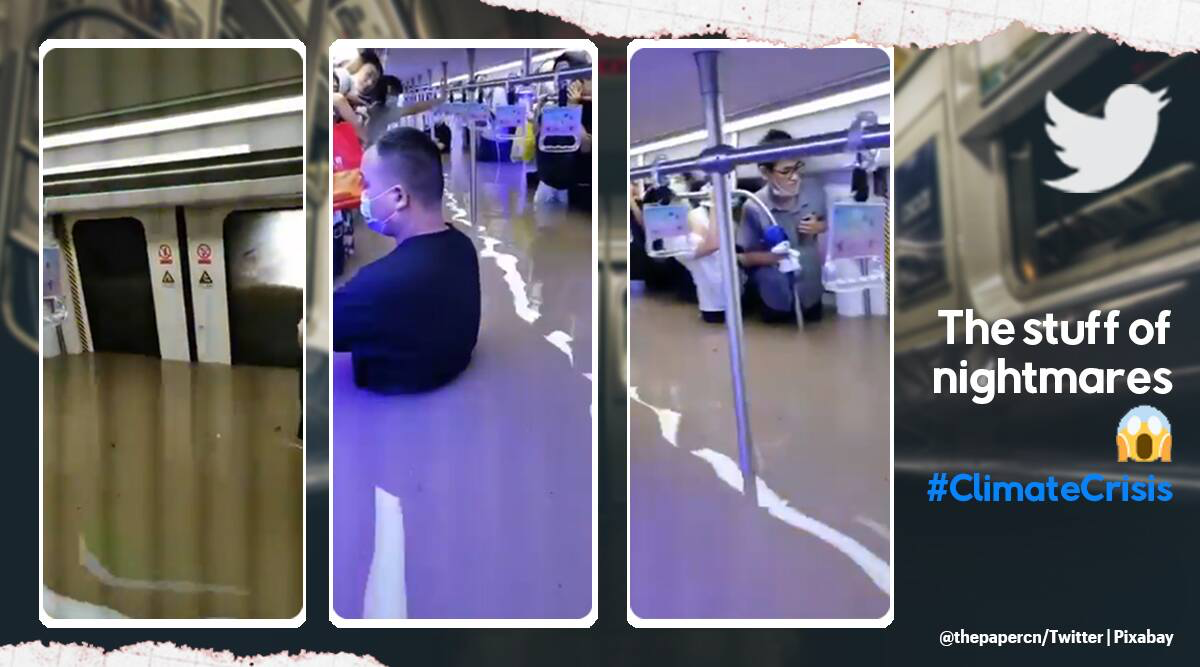 When looking at images like this, it is not surprising that young people are experiencing eco-anxiety on a day to day basis. It circles around the internet in ‘meme’ form, but the notion that whole countries can be burning and we’re all supposed to go to school or work without feeling a thing, is no laughing matter. While the Lancet is reporting on the psychological effects of the climate crisis on young people, studies have also shown that these legitimate fears of a climate ‘apocalypse’ is stopping people from having children. 96% of 27-45 year olds surveyed stated that they were ‘were very or extremely concerned about the wellbeing of their potential future children in a climate-changed world’.

‘Birthstrikers’ is now a word in our lexicon, as women are refusing to have children until climate change ends. Some of these women have been influenced by Extinction Rebellion, who this week targeted Buckingham Palace, in their crusade to have the climate emergency treated such – as an emergency. Much of this is aimed at the upcoming ‘COP26’ summit in Glasgow – the 26th summit of UN nations meeting to discuss climate change. It was at the COP21 summit in Paris that the 1.5°C warming limit was set, but in light of the IPCC report this summer, we may have some more urgent objectives put in place.

However, even if this does come to fruition, the very nature of this being the 26th annual conference on climate change shows just how slow a process it is. What will it take for economically developed countries to put their money where their mouth is, to support radical change and slow down the apocalyptic nightmare that we are already in the midst of. We often accuse clothing brands of green washing, but western governments are culprits too. The UK is hosting COP26, arguing for its importance, and yet the government is spending on the climate crisis constitutes just 0.01% of the budget.

If they have an issue with the Victoria fountain being painted red, just wait until the Thames Barrier crumbles against sea level rise, and mass flooding in London wipes out every monument we have. However, in the same way the importance of the next 2 decades can be seen as a reason to panic, it’s also an opportunity. Planet Mark and other organisations are branding the years running up to 2030 as the ‘Decade of Action’ – aka our chance to make a difference. If the IPCC report has shown anything, it’s that it’s make or break time and each and everyone of us needs to act.

You could join your local Friends of the Earth faction, ‘Plastic Free’ group or litter picking squad. There’s hundreds of petitions to sign, including supporting the cross party ‘Climate and Ecological Emergency Bill’. Or take a look at the many, many groups calling for action at COP26: